Hydrilla verticillata (a.k.a. hydrilla) is an invasive freshwater plant common in Florida, Georgia and other southern states. It was probably brought to the Tampa and Miami areas as an aquarium plant in the late 1950s. By the 1970s, it was established throughout Florida. If left unmanaged, hydrilla is capable of creating damaging infestations which can choke out native plants, clog flood control structures (which can lead to flooding), and impede waterway navigation and recreational usage. In addition, hydrilla is showing resistance to fluridone, a systemic herbicide used to manage it for the past 20 years. According to the University of Florida / IFAS Center for Aquatic and Invasive Plants, millions of dollars are spent each year on herbicides and mechanical harvesters in Florida in an effort to place hydrilla under “maintenance control.”

There was a need for research and extension experts to design and transfer new, innovative methods of managing hydrilla. 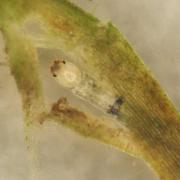 Thanks to a 4-year grant from the USDA National Institute of Food and Agriculture, University of Florida / IFAS research and extension faculty, FAMU faculty and an ARMY Corps researcher are tackling the hydrilla problem head-on through the new Hydrilla Integrated Pest Management Risk Avoidance and Mitigation Project (Hydrilla IPM RAMP).  This team is studying new chemical and biological control methods as part of an overall hydrilla integrated pest management (IPM) plan.  Extension faculty are responsible for transferring this new information to stakeholders through demonstrations and educational programs, the project web portal, and published works.

Hydrilla IPM RAMP promotional materials were also developed to increase extension stakeholder access and awareness of research-based information regarding the hydrilla miner and other sustainable strategies for managing hydrilla.  These promotional materials are primarily used to help guide stakeholders to the Hydrilla IPM RAMP portal at http://entomology.ifas.ufl.edu/hydrilla  QR codes were utilized on all promotional items to help direct stakeholders to the project portal on the web.  This portal serves as a clearinghouse for relevant research and extension-related resources.  In addition, this web portal served as the entry point for the Hydrilla IPM RAMP Project survey.

The Hydrilla IPM RAMP educational campaign survey was utilized to determine stakeholder characteristics and management practices.  In total, 541 people participated in this statewide survey which was conducted over six weeks in 2011.  We were able to determine the following:

The Hydrilla IPM RAMP project began in 2011.  Research is still being conducted on the development of the Hydrilla IPM plan; however, extension agents were able to engage the public through the use of survey instruments, public presentations and web portal.  As a result of our stakeholder survey, we learned that 72% of respondents preferred to receive new information about hydrilla management via the internet.  Our Hydrilla IPM RAMP web portal will be an ideal way to transfer this new information to stakeholders and the promotional items will play an increasing role in our outreach efforts.

Photo provided by UF/IFAS Extension
Photos and graphics cannot be altered in any way without permission.

In 2013, two learning lessons were posted at eXtension. To watch them, click on the following links:
Hydrilla IPM RAMP
Hydrilla Tip Miner