Various groups across the United States have invested in the development of smartphone apps to make reporting data on invasive species easier than ever. Below is information on a few of the 18 apps recently created by Bugwood to help identify, gather information about and to report infestations of invasive species. Bugwood designs and publishes comprehensive applications that engage users with invasive species, forest health, natural resource and agricultural management. Click here to see if there is an app available for your region.

The Southeast Early Detection Network (SEEDN) app brings the power of EDDMapS to your smartphone. Now you can submit invasive species observations directly with your smartphone from the field. These reports are uploaded to EDDMapS and e-mailed directly to local and state verifiers for review.

This app is based on the U.S. Forest Service publication: A Field Guide for the Identification of Invasive Plants in Southern Forests. Invasions of nonnative plants into forests of the Southern United States continue to go unchecked and only partially unmonitored. 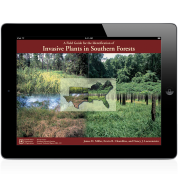 IveGot1 brings the power of EDDMapS to your smartphone. Now you can submit invasive species observations directly with your smartphone from the field. These reports are uploaded to EDDMapS and e-mailed directly to local and state verifiers for review.

Easy species reporting that captures your current location and allows you to submit an image of your sightings. IveGot1 allows for both online and offline reporting with reports saved on your phone for uploading when you have network connectivity.

The goal of the project is to strengthen ongoing invasive-species monitoring efforts in Massachusetts by enlisting help from citizens. The web- and smartphone-based approach enables volunteers to identify and collect data on invasive species in their own time, with little or no hands-on training.

The Landscape Alternatives app is a collaboration between the Midwest Invasive Plant Network and the Center for Invasive Species and Ecosystem Health at the University of Georgia. It is based on the brochure, Landscape Alternatives created by the Midwest Invasive Plant Network’s Green Industry Committee under agreements with the National Fish & Wildlife Foundation (funded by the U.S. Fish & Wildlife Service) and the U.S. Forest Service.

This app focuses on plant species that are used ornamentally and have become invasive in at least part of the Midwest. Cultivars or hybrids produced from these species may or may not be invasive.

Provides a means of reporting new sightings of select invasive species in Missouri River Watershed Coalition States and other surrounding states, a mechanism for alerting appropriate individuals to the reports, and generates distribution maps for the reported species.

EDDMapS goal is to maximize the effectiveness and accessibility of the immense numbers of invasive species observations recorded each year.