Asian longhorned beetle, Anoplophora glabripennis, is a recently introduced pest from China. It is believed to have entered the United States inside solid wood packing material from China (USDA – Forest Service 2002). It was first discovered in the United States in 1996 in New York. In 1998, an infestation was found in Chicago. In 2002, Asian longhorned beetle was found in New Jersey and has since spread to Toronto, Ontario, and eastern Massachusetts. Eradication programs have been initiated, and it is yet undetermined whether this pest exists elsewhere in the United States. 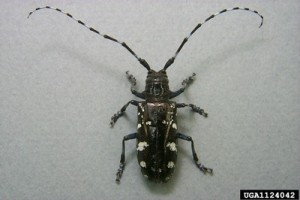 Figure 1. The black body with white mottles and the alternating black and white bands on the antennae help distinguish the Asian longhorned beetle. Photo by Donald Duerr, USDA Forest Service, courtesy of forestryimages.org

Adult Asian longhorned beetles are 1 to 1½ inches long with antennae that can be 1 to 2½ times their body length (USDA – Forest Service 2002). Adult bodies are black with white mottles. The antennae have a distinctive black and white banding pattern. The feet often have a bluish tinge (Fig. 1). After mating, females chew dime-sized depressions in the bark of hardwoods to lay their eggs in (USDA – APHIS 2004). After hatching, the larvae (Fig. 2) bore into the tree to feed on the vascular tissue. The larvae continue to bore into the wood of the tree, forming large tunnels and galleries. The larvae pupate in the wood near the surface. The newly formed adults emerge through large, perfectly round exit holes (3/8 inch in diameter). Emergence usually occurs from June to October (USDA – Forest Service 2002). 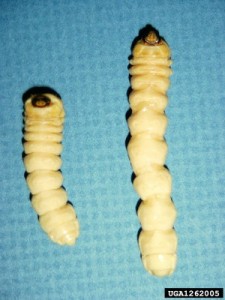 With the exception of maples, most of the major host species for Asian longhorned beetle are usually not a dominant overstory component in eastern and midwestern hardwood forests; however, these species can comprise a significant proportion of the forest tree species, add to biodiversity, and are important ecologically. If Asian longhorned beetles further expand their range and become established in large forested tracts, the potential exists for further spread into the Midwest and southern Appalachians. Infestations could reduce biodiversity and alter tree species composition across a large portion of U.S. forests, although the exact extent and severity of the potential damage is unknown to date.