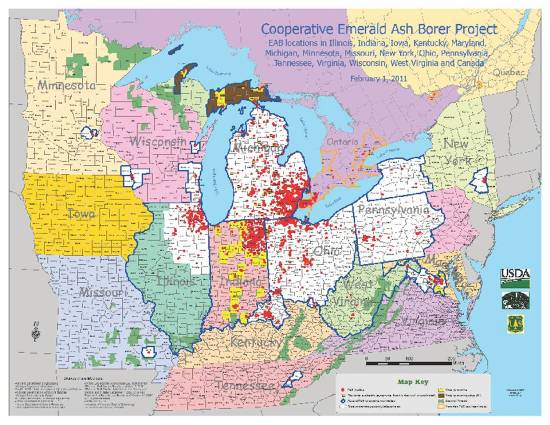 Figure 1. A map showing the spread of emerald ash borer within the northeastern United States and southeastern Canada. http://www.emeraldashborer.info

The emerald ash borer usually has a one-year life cycle. Adults emerge in early summer. The adult beetles usually live for about three weeks, during which time they are very active during warm, sunny days (McCullough et al. 2008). Adults feed upon ash leaves and lay their eggs in bark crevices of ash trees. Once the eggs hatch, larvae bore into the cambium layer and begin making winding S-shaped galleries. The larvae overwinter inside the tree and pupation begins in late spring. The new adults emerge in early summer, leaving a clear-cut, D-shaped exit hole (Wilson and Rebek 2005).

Adults are small, slender beetles (10 to 13 mm in length) (Wilson and Rebek 2005). Adult bodies are green to bronze. The wing covers are noticeably metallic green (Fig. 2a). The larvae are 26 to 32 mm in length, cream colored, and dorsa-ventrally flattened (Fig. 2b).

Figure 3. Signs that may indicate that a tree is or was infested with emerald ash borer. (A) (left): Adult exit holes have a characteristic D-shape. (B) (right): Epicormal growth, shoots sprouting from the main trunk, is a sign of stress that could be related to emerald ash borer infestations. Photos courtesy of forestryimages.org. 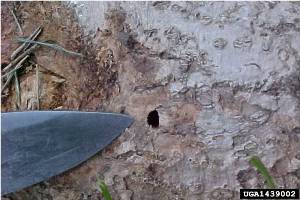 Although ash species do not dominate the southern Appalachians as they do in midwestern and other eastern forests, they still comprise a significant proportion of the forest canopy. Emerald ash borers have the potential to severely reduce the occurrence of ash trees throughout the southern Appalachians, alter the ecosystem, and reduce the biodiversity of the forest canopy. Ash trees are also an important ornamental urban shade tree across most of the northern United States including western states, and emerald ash borer could cause significant damage and costs.