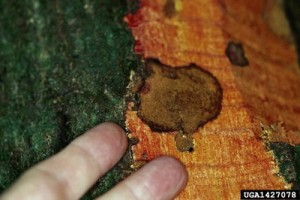 Sudden oak death causes cankers on the stems of oaks (Fig. 1). Trees often bleed reddish or black ooze from the cankers (Fig. 2). Under the bark of infected trees, necrotic tissue surrounded by black zone lines often can be found (USDA – Forest Service 2002). Cankered trees may survive for one to several seasons. Once crown dieback begins, leaves turn brown within a few weeks. The disease usually does not spread from oak to oak since it rarely produces spores from infected bole cankers. If, however, the host is also a shoot and leaf host, spores will be produced on these infections. However, the pathogen infects many species of shrubs. Two common genera for host plants are Rhododendron spp. (common in the Appalachians) and Camellia spp. (USDA – APHIS 2004). These shrubs are not killed, but spores are readily produced on infected leaves (Fig 3), which display spotting and blighting symptoms. Another common symptom is twig dieback. 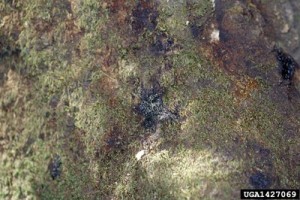 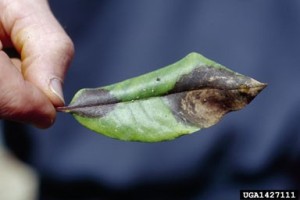