The Burmese python, one of the largest snake species in the world, has been reported as invading the Everglades since the 1980s. It is a large predator that has a significant negative impact on the native wildlife in the areas it invades. Several  pregnant females have been captured from the wild. A female Burmese python usually lays 12 to 36 eggs but can lay as many as 100 eggs; the gestation period is 60 to 90 days. This nonvenomous constrictor can attain a length of 26 ft. (8 m), although it may not typically grow that large in the wild. The Burmese python is dark colored, with many brown blotches bordered in black down its back. Considered semiaquatic, it also is a good climber. It is one of the most commonly kept exotic snakes in the pet trade. Moreover, people have released their pet pythons when the snakes have grown too large or become too expensive to care for easily. These factors have ensured a large population of these snakes in the wild. More than 1,800 Burmese pythons were removed from the Everglades between 2000 and 2011; however, it is believed that this number represents only a fraction of the actual population. In 2012, the U.S. government instituted a ban on the importation and transfer across state lines of Burmese pythons and three other species of constrictor snakes. The Burmese python’s native range is from India to lower China, the Malay Peninsula, and some islands of the East Indies, where it typically lives near water.

What are invasive species, and why should we be concerned about them?

Taxonomy: Scientific and Common Names for This Species

Burmese python – The reported distribution of this invasive species across the United States (Source: EDDMapS)

Up-to-the-minute distribution maps and why they are important

What is the best way to report the occurrence of an invasive species?

This invasive species can be identified by looking for the characteristics described in the paragraphs that follow.

The Burmese python is a constrictor that can reach a length of 26 ft. (8 m), although it may not typically grow that large in the wild. It is dark colored, with many brown blotches bordered in black down its back. The markings allow the snake to blend well with its surroundings in the Everglades. 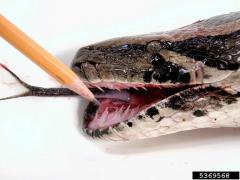 Control and management recommendations vary according to individual circumstances. Location, habitat, weather, and a variety of other conditions are factors that help determine the best treatment choice. To find the safest and most effective treatment for your situation, consult your state’s land-grant institution. If you will use chemicals as part of the control process, always refer to the product label.