As climate variability increases, each species within an ecological community will respond individually. With current information, it is impossible to know specifically how climatic changes will affect native plant populations or how invasive plants will respond. It is certain, however, that no two plants will respond in the same way to any given change. Regardless of the instigating factors, the establishment of invasive plants would likely be assisted if the current ecosystem breaks down (Wagner and Stohlgren 2000).

After reviewing weather patterns in the southeastern United States, the U.S. Global Climate Research Program found: “Southeast annual average temperature has risen 2°F since 1970, with the greatest seasonal increase in the winter months. There has been a 30 percent increase in fall precipitation across most of the region, but a decrease in fall precipitation in South Florida. Summer precipitation has decreased across almost the entire region. The percentage of the Southeast in moderate to severe drought increased during the past three decades. There has been an increase in heavy downpours. The power of Atlantic hurricanes has increased since 1970, associated with an increase in sea surface temperature.” (USGCRP).

The U.S. Global Climate Research Program is predicting warming for the southeastern United States: “Continued warming is projected, with the greatest temperature increases in summer. The number of very hot days is projected to rise at a faster rate than average temperatures. Average annual temperatures are projected to rise 4.5°F under a lower emissions scenario and 9°F under a higher emissions scenario with a 10.5°F increase in summer and a much higher heat index.” (USGCRP) 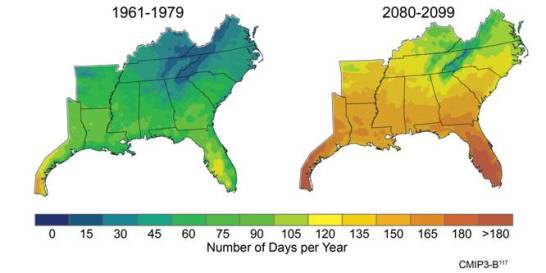 Figure 1. Research by the U.S. Global Climate Research Program indicates that for the southeastern United States the number of days per year with peak temperature greater than 90°F is expected to rise significantly, especially under the higher emissions scenarios as shown in the map. By the end of the century, projections indicate that north Florida will have more than 165 days (nearly six months) per year above 90°F, up from roughly 60 days in the 1960s and 1970s. The increase in very hot days will have consequences for human health, drought, and wildfires. (www.globalchange.gov)

Related to Invasives in Southern Forests: