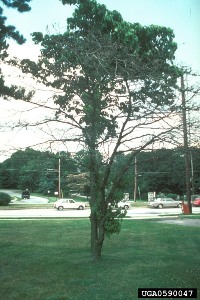 Dogwood anthracnose is a relatively new disease to North America. It was first observed in 1976 affecting a population of Cornus nuttallii in Washington state (Byther and Davidson 1979). Two years later, Pirone (1980) noticed a widespread and rapid deterioration of flowering dogwoods in New York and Connecticut (Fig. 1). In 1983, the fungus associated with the anthracnose on C. nuttallii was identified as a species of Discula, and flowering dogwood (Cornus florida) and Japanese dogwood (Cornus kousa) were noted as minor hosts (Salogga and Ammirati 1983), but C. Florida is now known as a major host that is impacted by this disease. Finding the disease distinct from other Discula spp. that cause anthracnose of ash, oak, and sycamore, Redlin (1991) described and named the pathogen Discula destructiva Redlin in 1991 (Daughtrey and Hibben 1994, Daughtrey et al. 1996).

Although the origin of dogwood anthracnose is unknown, the results of DNA analysis combined with its rapid spread have led many to conclude it was introduced (Daughtrey et al. 1996). Researchers also speculate that climatic changes and droughts may have predisposed trees to infection, thus causing coincidental outbreaks in the Northeast and the Pacific Northwest (Anderson et al. 1994).

In the eastern United States, the disease has spread rapidly down the Appalachians, primarily on Cornus florida, the eastern flowering dogwood. By 1995, the disease had been confirmed in northern Georgia (1987), western North Carolina (1988), and as far south as northern Alabama. Dogwood anthracnose has been reported on over 12 million acres in 180 counties (Anderson et al. 1994, SAMAB 1996).

Disease severity within infected areas also has increased rapidly. Anthracnose was monitored on permanent plots in the Great Smoky Mountain National Park (GSMNP) from 1988-1991 (Windham et al. 1992). During that period, the number of plots with severe epidemics (more than 25 percent of foliage blighted) increased by 638 percent. As of 1999, anthracnose had killed 49.7 percent of the native dogwood trees in 24 western counties of North Carolina (USFS 2001). In the GSMNP, it is estimated that more than 90 percent of the dogwoods have died in heavily shaded cove and alluvial forests. Disease severity in the South seems to be more intense at higher elevations. In general, damage is most severe at elevations above 3,000 feet, where forest and ornamental dogwoods may be eliminated. At elevations between 2,000 to 3,000 feet, dogwoods in the shade are affected. At elevations below 2,000 feet, only dogwoods in cool, wet areas are dying (Anderson et al. 1994).

The decline of dogwood populations resulting from dogwood anthracnose has several serious impacts in the Southern Appalachians. Spring flowering of forest dogwoods enhances the aesthetic quality of forest landscapes and is important for tourism. Beyond this aesthetic loss, the absence of native dogwoods and their fruits is probably detrimental to wildlife. Dogwood fruits, rich in fat and protein, are a preferred food for turkeys, bobwhite quail, squirrels, rabbits, and deer, as well as numerous non-game species of birds. Dogwood leaves also have a high calcium content and decompose rapidly. Their loss could hasten soil acidification, reduce nutrient availability, and influence numerous ecological relationships (Daughtrey and Hibben 1994). 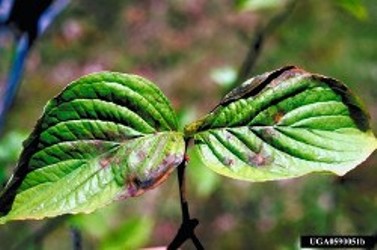 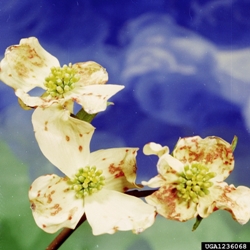 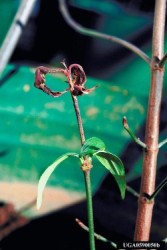 Leaf symptoms on C. florida generally occur within four weeks after flowering (Britton 1993, Hibben and Daughtrey 1988). Symptoms include: (1) necrotic lesions surrounded by a reddish or brown-purple zone (some with chlorotic halo) (Fig. 2 and 3), (2) shot holes, (3) necrotic blotches at the leaf tip or along the blade periphery, or (4) blight of the entire blade (Hibben and Daughtrey 1988) (Fig. 4). Leaf spots vary according to light exposure. Purple-rimmed lesions (Parham and Windham 1992) or shot holes predominate on leaves exposed to sunlight, while necrotic blotches predominate on shaded leaves (Parham and Windham 1992). Stems show similar symptoms as seen in Figure 5 with a canker at the base of an epicormic branch and Figure 6 showing conidia (spores) exuded from a dead twig infected with Discula destructiva. Blighting commonly occurs throughout the canopy of understory C. florida, or within the interior canopy or on epicormic branches of exposed trees. Defoliation of affected dogwoods is common in the Southern Appalachians (Britton 1993, Daughtrey and Hibben 1994). 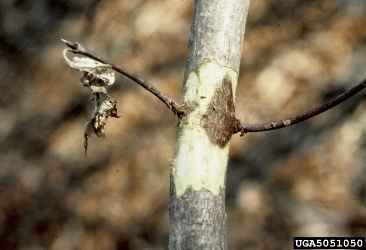 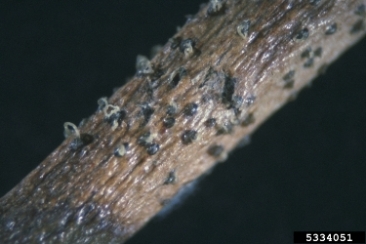 The disease kills dogwoods of all sizes, but it is most severe on young seedlings. Regeneration can be eliminated in some areas. Large C. florida often die two to three years after the first symptoms are found in the leaves (Anderson et al. 1994). Overall, vigorous trees tend to be less damaged than weak trees. Trees that survive one or more seasons of severe anthracnose usually have swollen areas on trunks and branches where cankers were enveloped by new tissue (Daughtrey and Hibben 1994).

Environmental factors influence dogwood’s susceptibility to the disease. Understory forest dogwoods are more prone to infection than trees growing in full sunlight. For this reason, ornamentals grown in open, sunny sites are often disfigured without being killed. In the Southern Appalachians, mortality is most likely at elevations above 3,000 feet. Below 3,000 feet, damage is most severe on moist, cool sites such as northeast-facing slopes (Chellemi et al. 1992, Hoffard et al. 1995).

Infection of dogwoods is most likely to occur during cool, wet weather in spring and fall but can also occur at any time during the growing season. Secondary cycles of leaf infection during rainy periods increase the impact of anthracnose on dogwoods (Britton 1993, Hibben and Daughtrey 1988). Drought and winter injury appear to increase susceptibility (Daughtrey and Hibben 1994).