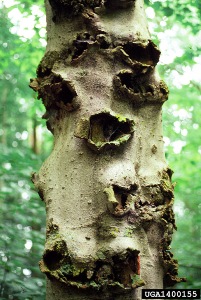 Beech bark disease (Fig. 1) is caused by a complex of two agents, the beech scale insect, Cryptococcus fagisuga (Fig. 2), and a fungus, Nectria coccinea faginata. Infestation is easily identified by the white woolly material on trunks, secreted by the female scale insect (Fig. 2). Beech scale insects have long been a common pest of American beech (Fagus grandifolia) and other trees throughout most of North America. By themselves, the scale insects do not fatally injure beech. However, scale insects form a symbiotic and fatal combination with the fungus Nectria; by penetrating the bark, the scale insect allows the fungus to invade (Houston 1975, SAMAB 1996).

Beech bark disease was killing European beech (Fagus sylvatica) before 1849, but it was not until 1914 that the disease complex was discovered and the Nectria fungus identified. In 1890, the disease arrived in North America via Nova Scotia, and, by 1932, the scale-fungal complex had spread to Maine and Massachusetts (Houston 1975). By the 1980s, the disease was in the Monongahela National Forest in West Virginia (Houston and O’Brien 1983). In 1993, it was found in the Great Smoky Mountains National Park in both North Carolina and Tennessee (Johnson et al. 1995, SAMAB 1996). 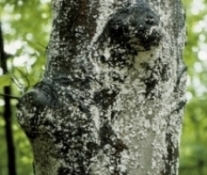 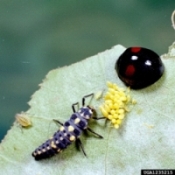 Declines in the beech scale population occasionally occur over large areas, suggesting that environmental factors may affect the insect. There may be some promising options for biological control of beech bark disease. The ladybird beetle, Chilocorus stigma, feeds on the scale (Fig. 3); and a fungus, Nematogonum ferrugineum (Gonatorrhodiella highlei), has been reported to parasitize Nectria fungi. However, more research is needed before biological control can be implemented. Insecticides can be used to control scales on high-value ornamental trees. Some trees free of the disease have been found in affected areas, indicating some resistance to the scale insect and suggesting that breeding programs to increase resistance in the beech population may be another promising research area (SAMAB 1996).