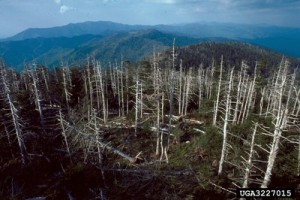 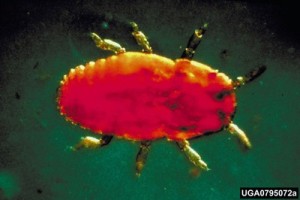 The balsam woolly adelgid is a small (< 1 mm in length), wingless insect. Adults are black to purplish and slightly round. They are not easily visible to the naked eye. However, a noticeable white woolly mass covers the adults and their eggs, making infestations easily visible. These woolly masses appear as white dots along the trunk, limbs, and buds of infested trees (U.S. Forest Service 1989). Within the United States, the entire population is female, and reproduction occurs via unfertilized eggs. Adults lay up to 100 eggs, and two to four generations are produced each year. The mobile immature stage, called crawlers, is orange, with small legs and black eyes (Figure 2). The eggs and crawlers are dispersed mainly by wind but also can be dispersed by birds, mammals, and humans. 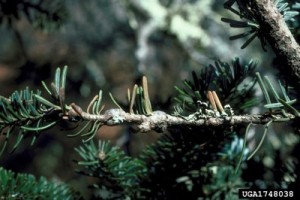 When feeding, the adelgids inject salivary compounds into the boles of Fraser firs, stimulating the growth of abnormal xylem cells. These cells, called Roholz cells, are red and wider than normal (SAMAB 1996). The Roholz cells interfere with the ability of the tree to transfer water, causing increased stress. Most species of fir produce a defense response to adeligid infestation, thus reducing the stress. However, Fraser firs usually do not display this response. Initial signs of damage from infestations include gouting (swelling) of twigs and buds and twig dieback ( U.S. Forest Service 1989). A heavily infested tree may die within two to seven years after infestation. 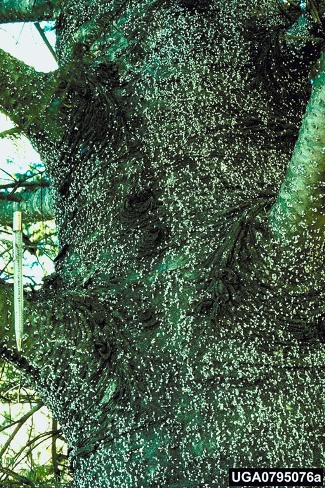 Chemical control of balsam woolly adelgid is very expensive and time consuming. Ornamental trees or Christmas tree plantations can be treated with chemical controls to lessen the impact, but this is not usually feasible in forested settings ( U.S. Forest Service 1989). Other control efforts have been initiated with little result. Currently, Fraser fir populations remain at great risk from balsam woolly adelgid infestations.